So, I’d been invited to do something with a rundown piece of woodland attached to my local Chapel.

I remembered being part of an effort to tidy it up about ten years ago (a couple of years after joining the congregation on my arrival in Framsden to start work at Helmingham.) I wasn’t a key player in the process on that occasion and, although considerable time was put in, no one seemed to possess the momentum to keep on top of the work that would be needed afterwards. If I was to take the role on I knew it would be entirely voluntary and that any budget would be considered ‘less than shoestring’.

This was going to be a big job.

I wandered down to have a look. It was overgrown with brambles and thorn, a pylon retention cable had snapped from the top of a wooden pylon, phone cables were trapped under a partially fallen tree, years of plant material had been dumped in one corner and harboured a sizable nest of rats. This was going to be a big job. I’d need help! 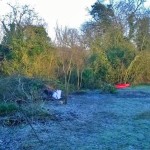 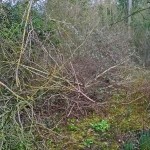 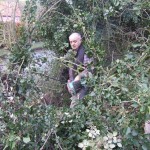 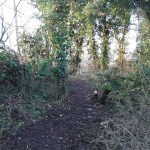 Enter Dave (now known as Dave the Powersaw). He’s usually in South Africa acting as a missionary amid the shabeens (drinking dens) and farmsteads, but who often returned home to the UK to raise funds and recuperate. Turns out he loves cutting down trees! Saved me a lot of time, I just went through shortening the logs for my woodburner! I concentrated on defeating the rats and ringing utilities to sort out their pylons and wires. Power Networks sorted the pylon within a week. Open reach (BT) said they’d get back to us after assessing the work (after two months we gave up and freed the telephone wires ourselves). The clearance of years of dumped plant material presented us with a magnificent heap of well rotted compost, so it wasn’t all bad after all!

Dave reappeared at the end of the wood, chainsaw still into action, and didn’t stop until he’d levelled an old hedgerow that ran along the side of the Chapel. This presented a new dimension. The view to the wood had been opened up, the playing field enlarged and the drain/ditch from the Chapel roof had been exposed. This wasn’t a bad problem at all. It was Autumn 2014 and the annual Helmingham Garden border tidy was about to begin. This meant that there’d be a lot of off-cuts from the border perennials. The new Pastor smiled happily, “Yes, I think a flower border along the side of the Chapel would be very nice.” I saved over three hundred pieces of plant material from the composting bay and potted them up at home.

The next job, whilst Dave was back in Africa, was to drive a path into the wood so that we could enter safely. Easy access for the rest of the work. Dave would return in April 2015 to a changed scene.

Next time team work and transformation…