Dry gardens in the Mediterranean: An undiscovered diversity 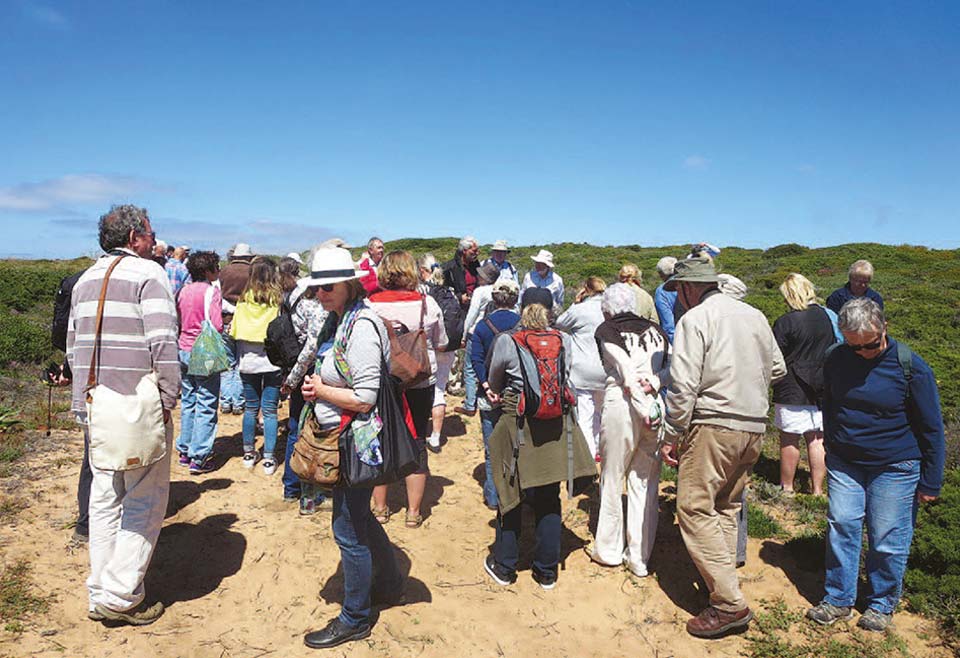 In April I had the opportunity to attend a spring conference in the Algarve, organised by the Mediterranean Gardening Association Portugal. I was one of two other professional horticulturists who were sponsored to attend the weekend-long conference; MGAP paid for all my expenses whilst in Portugal and the PGG paid for my air flight. My heartfelt thanks to both organisations, one of the many perks of being a trainee!

The conference consisted of two days of lectures and guided wildflower walks to biodiversity hotspots. As well as being inspired by fantastic presentations on how to garden sustainably in Mediterranean climates and being awestruck at the amazing spring flora, it was also a great opportunity to network and meet other like-minded, passionate people. I met old friends and made new ones in the process.The many associate organisations of Mediterranean Plants and Gardens (of which MGAP is an associate) had members who turned up and supported the event from all over the world; some just for the main weekend conference and others for the optional pre-conference garden visits to Sintra and Lisbon.

Having lectures in the mornings followed by wildflower walks in the afternoons split the days up perfectly. I thoroughly enjoyed all of the talks; however, the two speakers I learnt the most from were Olivier Filippi and Dr Ken Thompson. They both had the ability to make an hour and a half disappear in the space of ten minutes!

Olivier Filippi runs a nursery in southern France with his wife Clara, specialising in plants suited to Mediterranean type climates; his ethos is no irrigation, no pesticides and low maintenance. He also has a display garden which is a pioneering example of dry gardening. His talk was based on highlights from his new book, Planting Design for Dry Gardens. As well as explaining how to successfully create a water-wise garden and what kind of plants to use, Olivier also showed us photos of places which inspire him, like the dry landscape in Crete, the Pindos mountains and Cyclades Islands in Greece, and the wildflowers in Corsica. It made me realise that natural landscapes are gardens with no gardeners, with beauty growing in the harshest environments.

When designing gardens Olivier is a fan of blending the garden into the surrounding landscape, working with what’s around him and not fighting against it. Mediterranean plant species are prone to Phytophthora; it is prevalent with heat and water from irrigating gardens in warm climates.

Another reason not to use irrigation! Olivier also touched on the subject of allelopathy, plant relationships which work in a beneficial way by the chemical inhibition of one species by another. The inhibitory chemical is released into the environment where it affects the development and growth of neighbouring plants – allelopathic chemicals can be present in any part of a plant.

My favourite part of Olivier’s talk was how gardeners in general need to learn to love weeds and everything they offer, from having aesthetically pleasing flowers to attracting beneficial insects – in short they are wildlife reservoirs. This followed on to his closing statement, ‘change the gardener, not the garden’ which, in my opinion, epitomised the entire weekend!
PGG Member Dr Ken Thompson works in the department of animal and plant sciences at the University of Sheffield as a plant ecologist. He has published books widely on nearly all aspects of plant ecology as well as written a number of books for gardeners; he also writes regularly about gardening for the Daily Telegraph. He was one of the winners of an RHS Veitch Memorial Medal this year, awarded to people who have made an outstanding contribution to the advancement of the art, science or practice of horticulture. Kudos Ken!

Ken’s talk was entitled ‘Soil, the Final Frontier; what goes on out of sight and what do we really know about it?’ I work in an organic garden so am fully aware that before you can get excited about what plants to put in your garden you need to get excited about the soil; it is the foundations from which plants either thrive or die. Ken explained about the basic soil types and nutrients in the soil. What really made me sit up and think was when he touched on some mind-blowing statistics like how soil is the largest single reservoir of biodiversity on the planet; better than oceans, rainforests, etcetera. Prokaryotes are creatures with no nuclei, for example bacteria. They make up more than half of biodiversity on earth; this diversity is 1,000 times greater in soil than in all other environments on earth combined; 8 billion bacteria live in 1 gram of soil.

Ken is a huge ambassador for the no-dig gardening method, cultivating the soil correctly once before planting and not digging it again. As well as prolonging the life of soil it also extends the longevity of most gardeners’ backs! There are 100 metres of fungal hyphae in one gram of soil which is one kilogram of fungi per square metre of soil. 90% of all plants are mycorrhizal, with their roots transforming the soil by making transmission pores, adding organic matter and exuding sugars which attract good bacteria and protect from bad bacteria. Digging destroys roots, especially mycorrhizal ones, and everything roots do for the soil. Basically plants create soil structure, digging does not.

Both Ken’s and Olivier’s talks provoked controversial reactions from the listening audience; some were in total agreement, while others were less than convinced! Personally I was enthralled and inspired by both talks from start to finish.

Amoreira beach was the first ‘hotspot’ we visited. It was designated a biodiversity hotspot by the University of Lisbon and Council of Aljezur in 2016. Our guides for the afternoon were Udo and Claudia Schwarzer; Udo is a biologist and Claudia is a landscape architect, specialising in native plant gardens. Their wealth of knowledge of Algarve natural history and of the western Atlantic coast was unrivalled.

We explored a shale hill leading into salt marshes, then climbed higher into the cliffs, seeing notably different species in each area. Antirrhinum majus was growing en masse; Udo explained they only grow through the low-growing shrubs for support as they are too delicate to withstand the coastal winds on their own. Dipcadi serotinum was well camouflaged in the sand; I still find it strange seeing what looks like a brown version of a native English bluebell growing in Portugal! The large holoparasitic Orobanche foetida was quite common, some growing on their own while others were in groups of three or four. They were mainly parasitising Halimium sp. I also spotted the yellow form, which was very eye-catching.

The last activity of the conference before heading back to the airport was another guided walk around Cape St. Vincent peninsula. This was classified as a biogenetic reserve in 1988, owing to the high concentration of endemic plants. Both this area and Amoreira beach are in the Parque Natural do Sudoeste Alentejano e Costa Vincentina, the finest preserved stretch of European coastline. It includes various habitats and unique species of animal and plant life and is visited by many zoologists and botanists from all parts of the world. I was lucky enough to visit this area of extraordinary beauty last year it was a personal highlight being able to return again.

Our guides were Sue Parker and Pat O’ Reilly, directors of First Nature and authors of books on the natural history of the Algarve including: Wildflowers in the Algarve and Wild Orchids in the Algarve – both of which I recommend reading. It was a gorgeous sunny day, a pleasant contrast to yesterday’s cloudy skies. We went on a circular walk, starting inland by the official car park then out towards the coastline and back again. We spotted various different species; several Cistus, including Cistus palhinhae which is endemic to Cape St. Vincent. Teucrium vincentinum wasn’t as visually exciting as some of the other wildflowers but was a great find as it is also endemic to this area. 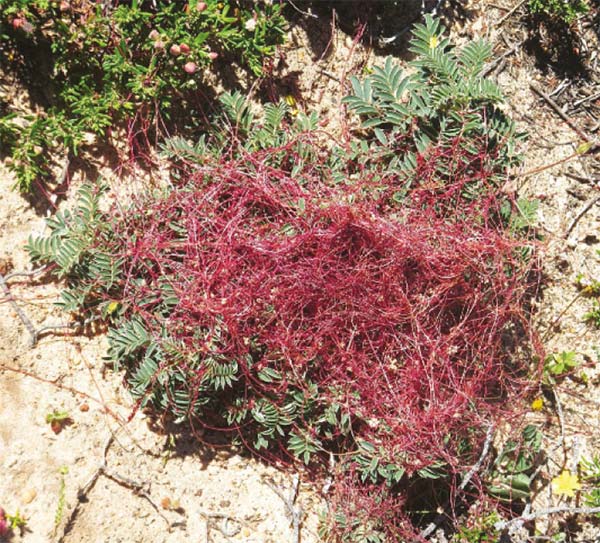 Tuberaria guttata, spotted rock rose, was a real cutie, especially when growing with Anagallis monelli – the yellow and blue flowers complemented each other superbly. It became breezier the further out towards the cliffs we went, making all of the Stipa gigantea dance in the wind. The tongue-orchid, Serapias lingua, was well hidden in the vegetation, I spotted it as I was crouching down to take a photo! We saw a great selection of parasitic plants, more diverse than yesterday. They were more prolific at Cape St. Vincent in comparison to last year. Bellardia trixago is hemi-parasitic, I spotted one on its own then just round the corner there was a group of them en masse!

We also found Orobanche minor, Phelipanche sp., and an unusual species which looked very similar to Cuscuta which can be found in the UK (commonly known as dodder). It was a tangled red web on Astragalus boeticus and couldn’t be identified, though it has been seen on previous occasions at Cape St. Vincent apparently. If anyone has any ideas as to what it might be let me know!
The conference was a whirlwind weekend, but one I wouldn’t have missed for anything. My thanks again to MGAP and the PGG for making my attendance possible.