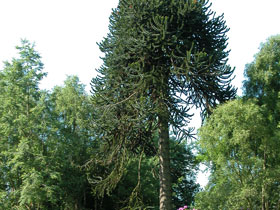 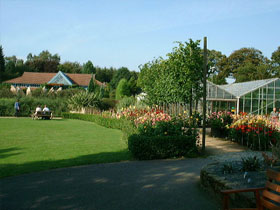 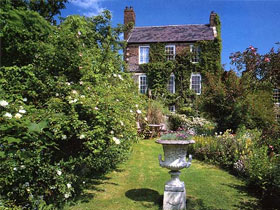 Durham University Botanic Gardens
Durham University Botanic Gardens comprise 10 hectares, set amongst beautiful mature woodlands on the southern outskirts of Durham City. The garden provides an academic resource to the University for teaching and research, as well as offering educational visits to schools. There are plant collections from around the world, including China, Japan, North America, South Africa, New Zealand and Chile, as well as a woodland garden, alpine garden and bamboo grove. The centre of the garden is dominated by a monkey puzzle tree which predates the botanic garden.

In the glasshouses are a collection of tropical rainforest plants (including the giant Amazonian water lily, Victoria amazonica), desert plants, and more familiar plants from the Mediterranean. There are also some tropical bugs, stick insects, scorpions and tarantulas with, occasionally, a selection of tropical butterflies. From late summer to early spring the arboretum is grazed by our rare breed sheep. They are a vital part of a green management plan as they graze the grassland for the benefit of wildflowers and insects.

There are various pieces of artwork around the garden including the recently installed ‘Vessels of life’, a gift to the garden from the Maharajah of Baroda. www.dur.ac.uk/botanic.garden

Crook Hall
Crook Hall is a 13th century, Grade I listed, medieval hall, a rare example of three eras of English domestic architecture; mediaeval, Jacobean and Georgian. The medieval Hall was built around 1208 although the solar wing has long since disappeared. The Jacobean Mansion was built in 1671 and in 1720 the Hopper family built the Georgian House.

There are ten separate garden areas, ranging from the secret walled garden (originally the vegetable garden for the medieval hall) and a Georgian walled garden once visited by William and Dorothy Wordsworth and John Ruskin, to a recently constructed cathedral garden and a cotoneaster maze! www.crookhallgardens.co.uk

10.15 meet at Durham BG for tea/coffee and biscuits
10.35 tour of gardens with Head Gardener Michael Hughes
12.00 lunch in DUBG café – buy your own in the café or bring a picnic
1.00 depart for Crook Hall – drive sharing cars if possible (city traffic and limited parking) or walk through bluebell woods and along the River Wear past the Cathedral, approx. xxx minutes
2.00 tour of Crook Hall and gardens with owners and other members of staff, covering Medieval architecture through to the plants that make the gardens beautiful. (The Hall is not open to the public that day but season ticket holders may be there).
3.15 home-made cream tea and depart.

£14.00 to include coffee and biscuits on arrival, entrance to Crook Hall and Cream Tea. Entrance to Durham BG is complimentary, please order and pay for your lunch on arrival at the gardens, or bring a picnic if you prefer.

Directions to Crook Hall from DUBG – Crook Hall & Gardens, Frankland Lane, Sidegate, Durham, Uk, DH1 5SZ – a short walk from Durham City’s The Gates Shopping Centre; follow the road next to the river from the Riverside and The Gates Car Parks, opposite the Gala Theatre.

Book Online or contact Sue Tasker for this event. A cheque for £14.00 made out to The Professional Gardeners’ Guild can be sent to Sue Tasker, Masons Farm, Little Clifton, Cumbria CA14 1YW by 3rd May 2014.
+ Google Calendar+ iCal Export

The PGG organise delightful visits and study tours to all parts of the UK and overseas.