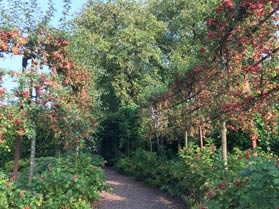 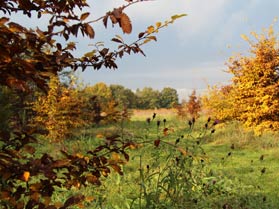 
There may be last minute cancellations due to changes in Government guidelines relation to the Covid Pandemic. If this is the case you will be notified by email and refunds will be offered.

Two of the drivers behind the Forbes Adams approach to the creation of Three Hagges Woodmeadow were to increase woodland and bio-diversity. Woodland in Britain has been reduced to 11%, the lowest in Europe, and the site itself was registering practically zero in bio-diversity levels as a result of years of monoculture.

The site was registering practically zero in bio-diversity levels. Although woodmeadows are not a historically recorded method of land management in the UK they were once abundant in the Baltic and further south and were probably widespread in the UK. As a method of management this mosaic of wood and meadow is recognised as a better way of enhancing a broader spread of wildlife than just planting a wood.
Planting started on the site in 2012 to coincide with the Queen’s Diamond Jubilee, and it was set up as a registered charity with the site being designated as community woodland where access is free. Grants have been obtained from the Forestry Commission and over 10,000 trees and shrubs have been planted in copses; the ground has been sown with a carefully selected seed mix of fast-growing annuals and slower-growing fine grasses with meadow perennials.

Ros Forbes Adams and the specialists who have given so much advice have been surprised at the rate at which wildlife has moved into the woodmeadow, even though the site is very much still in its infancy. Many specialists in their fields are involved giving advice and regularly monitoring the site for flies, butterflies, wild flowers, bees, invertebrates, bats… and the list goes on. It has become a centre of scientific research and a study site for the University of York. There is also a busy education programme involving local schools and an impressive volunteer force – it seems there is much to be optimistic about.

Skipwith Hall started life as a Jacobean farmhouse. It took shape as a Queen Anne manor house for the parish of Skipwith around 1700 when the medieval moated manor house opposite the church fell into disuse.

Skipwith Hall was the centre of a working estate as described by a Miss Elizabeth Shackleton when she came to visit the then owners, Mr and Mrs Walton in 1772. She writes on Tuesday 25 July: ‘Mr Walton took me into all his stables, barns, coach-house, and outbuildings – into all the gardens, stoves, hot houses, and hot walls, which are most large and handsome and well stock’d with all kinds of various sorts of good fruits – we never sat down, but after dinner had ten different sorts of grapes – one of Pines, pears, plumbs, currents and gooseberries.’ The old hot wall is extant facing south on to the Statue Border and now forming the rear wall of Richard’s Garden.

The estate was sold to Beilby, third Baron Wenlock of neighbouring Escrick Park in 1898. The hall was occupied by the agent until 1929 when Lord Wenlock’s only child, The Hon Irene Forbes Adam downsized from Escrick Park. Irene extended the house and redesigned the garden with the help of the English architect and gardener Cecil Pinsent (1884-1963) who is most well known for his work in Italy, particularly La Foce, the home of Irene’s cousin, the Contessa Iris d’Origo. It was he who was responsible for moving the main front to the rear of the house, the Italian Garden and lastly Richard’s Garden in 1952. The glasshouse by Richardson’s of Darlington was moved from Escrick Park to its present position. The garden was further developed in the 1960s by Irene’s son Nigel, particularly tree planting in the mini arboretum and the replanting of the Italian Garden.

Charlie and Ros Forbes Adam arrived in 2002 and the garden was redesigned by designer Miranda Holland-Cooper including the laying out of the herb maze and pond, and associated planting in the kitchen garden. Other redesigned areas included the long borders, the house terrace and formal beds; and the parterre and beech hedge were laid out in the house forecourt in order to keep cars away from the house. The border at the front of the house was replanted with formal clipped yew. The Italian Garden has also been replanted and new drainage installed to alleviate the flooding. The summer house at the back of the wood has been transformed by local shell artist Linda Fenwick. A new circular spring walk has been laid out around the mini arboretum which was the inspiration of the last head gardener, Matt Fox.
Work continues with ongoing development of a wildflower meadow in the orchard and latterly wild flowers and grasses on the front lawns.

The most recent addition is the No Dig vegetable garden in the kitchen garden which is the domain of Ros Forbes Adam and friend Meg.

10.00am Arrive, tea/coffee biscuits at Millers Tea Room, Hollicarrs Holiday Park, York Road, York, Y019 6EE
10.30am Introduction and tour of Three Hagges Woodmeadow by Ros Forbes Adams or Dan Carne, Woodmeadow Officer
12.30-1.30pm Bring your own picnic lunch to Skipwith Hall or buy your own at the Drovers Arms in Skipwith village
1.30pm Introduction to the garden at Skipwith Hall by Ros Forbes Adams or Charlie. Tour of the garden with Caroline Kernan. No Dig Veg in kitchen garden introduced by Meg and Ros Forbes Adams.
4.00pm Tea/Coffee and biscuit
4.30pm Plant swap and depart home

£20 per person to include entry, morning and afternoon coffee/tea/biscuits. Lunch at own cost.

There may be last minute cancellations due to changes in Government guidelines relation to the Covid Pandemic. If this is the case you will be notified by email and refunds will be offered.