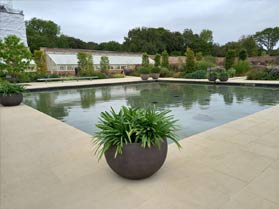 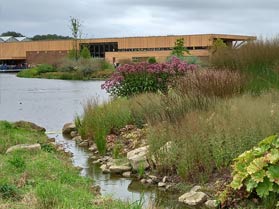 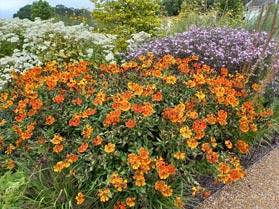 RHS Garden Bridgewater is the fifth RHS garden and one of the largest gardening projects undertaken in Europe in recent years. The transformation of this 154-acre green space will enrich the lives of local communities and their environment for the future.

The former site of Worsley New Hall, in Salford, is a heritage landscape that’s being transformed into an iconic RHS Garden. Landscape architect, Tom Stuart-Smith created the masterplan and our fantastic Bridgewater team, alongside award winning garden designers, have brought ‘gardens within a garden’ to life by blending history with world-class horticulture.

Designed by landscape architect Tom Stuart-Smith, the maze-like layout of the Worsley Welcome Garden resembles an abstract mosaic and gives the impression of a giraffe’s markings or mathematical Voronoi diagram when viewed from above. Thirty-one clipped beech trees resembling beehives, each standing 2m tall, deliver striking architectural planting around the garden. They are surrounded by drifts of grasses and herbaceous perennials including species that thrive in the garden’s damp soil such as Euphorbia palustris AGM, Iris sibirica, Lythrum salicaria ‘Swirl’ (purple loosestrife) and Rodgersia pinnata. Sculptural clipped yew domes dotted on the lawn further the ‘living architecture’ within the design and elegantly unify the space.

Large metal portals frame unique views of the garden. A striking feature, these were first seen in an RHS Chelsea Flower Show Bridgewater Show Garden in 2019. They act as gateways, guiding visitors via beautiful borders to the Weston Walled Garden beyond. The Weston Walled Garden is one of the largest Victorian walled gardens in the UK. In its original incarnation it contained a series of kitchen gardens built to service Worsley New Hall. A team of gardeners would have managed the 11-acres, using its sheltered location to grow fruit and vegetables.

Although the Hall is long gone, the inner and outer walls of the original walled garden were repurposed first as a nursery and latterly a garden centre, escaping demolition. Painstakingly restored, it is now the horticultural heart of Bridgewater, given new life with a series of wonderful gardens and exuberant borders co-created by award-winning landscape designers and our own RHS staff. The Weston Walled Garden consists of an inner walled garden surrounded by a series of connecting gardens that are enclosed by a lower-level outer wall. The inner walled garden is divided by a central wall into two halves – the Paradise Garden occupies one half and Kitchen Garden the other.

Within the outer wall is a series of gardens dedicated to serving our local community. So far these include the Peel Learning Garden, Community Grow and Community Wellbeing. The Orchard Gardens, which incorporate The Orchard and Bee and Butterfly Garden, curve around the Gothic architecture of Garden Cottage.

The contemporary Paradise Garden, designed by landscape architect Tom Stuart-Smith, occupies one half of the inner Weston Walled Garden. This space has its origins in the earliest civilisations, taking inspiration from traditional paradise gardens, and cleverly blends Mediterranean, Asiatic and American species. The garden’s walls create a microclimate in which a wide range of plants from all over the world can flourish. There are 89 individual planting beds, containing 27,000 plants, that envelop visitors in a calming and tranquil oasis. At the heart of the Paradise Garden sits a 70-sq metre Lily Pond. The pond is fed by two rills running east to west along the central spine of the garden and filled with water lilies.

Grit has been added to the beds on the east side of the Paradise Garden to mimic the impoverished soil of the Mediterranean. These borders feature plants that have adapted to dry climates, including Tall Bearded Iris cultivars Iris ‘Stellar Lights’, I. ‘Jane Phillips’, I. ‘Mer du Sud’ and I. ‘Superstition’.

Covering just over seven acres, and a work in progress, the Chinese Streamside Garden has a central location. Its newly constructed stream meanders slowly from Ellesmere Lake to Moon Bridge Water. Along the length of the watercourse are a series of smaller pools and weirs, while a sinuous path weaves over five stylised wooden bridges.

This predominantly woodland garden is in the early stages of its development. Distinctive character will evolve around specific horticultural themes including a Chinese meadow and a bamboo garden (or ‘Bambusarium’).

The Kitchen Garden has more than 100 planting beds. Planting here is a work in progress with many beds newly planted as the garden is actively developed. Designed to be both beautiful and productive, much of the fruit and vegetables grown here is supplied to the Bridgewater Café.

The space incorporates four distinct planting styles – the forest garden, a formal vegetable garden, a herbal garden, and planting on the walls that links them together. Forest gardening is a system in which land is managed to increase biodiversity and reduce soil erosion. Different crops, including trees, are grown in one space to the benefit of all plants. Formal rows of vegetables, herbs and cut flowers provide a link to the original function of the garden. Beautiful pollinator-friendly plants feature and there are practical ideas to inspire visitors. Instantly recognisable fruit and vegetables as well as more unusual cultivars sit together and blend modern best practice with traditional growing techniques.

The wall planting, designed by RHS Horticulturist Dr Sylvia Travers, provides a masterclass in fruit tree-training techniques. Heritage pears, including ‘Beurré d’Amanlis’, have been trained against the south-facing wall alongside apricots, plums and apples. The wires incorporate a variety of challenging shapes such as fan, espalier, Belgian fence and u-shaped cordons.

Bridgewater is fast becoming a truly inspirational Garden and one that has to be seen.

The cost for the day is £5.00 per person (members and non-members). There is no admission charge for members. If we can meet on the carpark and enter as a group it will be possible to take some people in on a member’s card. There is no refreshment cost included but it is possible to buy from the restaurant before entering the garden and at lunch time or before leaving.