Almost everybody is familiar with the stories of Jesus and the Garden of Gethsemane, a popular pilgrimage spot but also, as it happens, a nice olive garden. After taking in the stunning views from the Mount of Olives we went down to see the ancient olives trees believed to be the descendants of the original trees from the time of Jesus.

The olive trees are enclosed within a square with a grid pattern of gravel paths, although visitors are only allowed around the outside. Each section has olive trees of various size and age, with lavender and roses spotted around the perimeter. There is a noticeable calm and serenity within the garden even with the passing tour groups, the walls of Jerusalem forming a backdrop.

Scientific research was only recently carried out in 2012 and concluded that some of the olive trees are among the oldest broad-leaved trees known to science. Carbon dating from the oldest parts of three trees produced dates of 1092, 1166 and 1198 AD, giving an age range of 920 to 820 years old. Even more interesting results came from DNA testing that showed these trees shared the same parentage, making them maybe 3rd generation from the olive trees Jesus spent the night under. It seems possible that gardeners in the past have attempted to preserve a particular lineage, according to researchers.

All photos courtesy of John Barber. 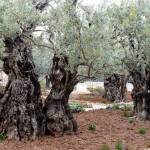 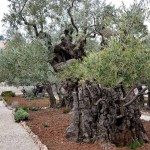 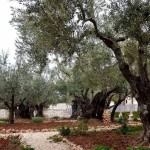 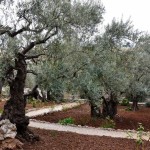