This article, and the way I grow our peas, may ruffle a few feathers. We don’t grow them as cordons because we don’t enter growing competitions with them. I’m not a competitive person. Don’t get me wrong, I admire the people who grow massive veg, or 1 vase of 9 sprays from 50 plants. But if I’m growing 50 plants I want at least 100 sprays a week for 2 months, fortunately not all needing to be of show quality. As long as there are people willing, and able, to grow sweet peas for show then I’m happy that I can grow mine my way with their way safe in their hands. 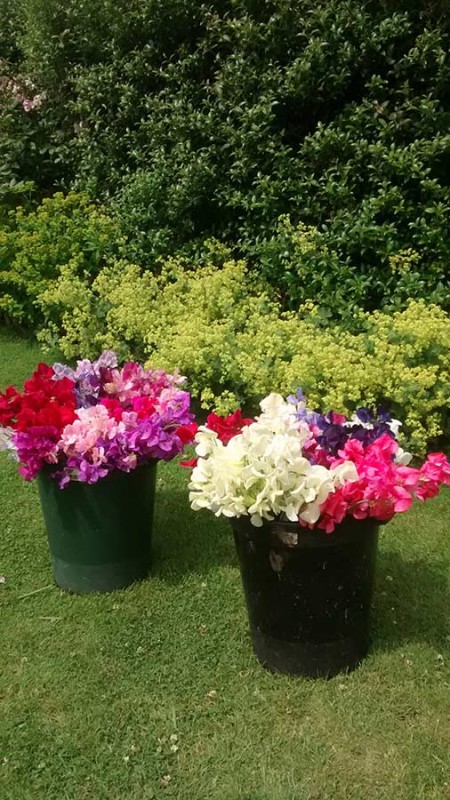 The way I grow them, I like to think, demystifies sweet pea growing, that’s the way it seems when our visitors say things like; they remember their grandad out in the garden unpicking all his sweet pea rings, or cutting the strings, spending hours taking the tendrils off, or simply that they can’t grow them, they never work or they’re too much work. Admittedly sweet peas do involve a bit of work, but no more than anything else in my opinion, except maybe naturalised snowdrops, but even they need splitting and replanting from time to time.

What I want is for more people to grow them. They’re wonderful plants and easy to grow and so varied in colour habit and style.

My season starts in November (first Monday of the 2nd week) when I sow the seeds. The first thing I don’t do is soak them, I don’t nick them either. I sow them in root trainers, 2 seeds to a cell, 2cm deep, covered with vermiculite. I then stand the root trainers in a tray of water until the vermiculite is damp, cover with the lid and leave them in a cool glasshouse until they germinate.

They don’t need watering again, unless you can feel by weight that they’re particularly dry, until they’ve germinated. Then I just water them as and when I think they need it. I usually get around an 85-90% germination rate If (as often happens) a few varieties fail to germinate I resow in January; if only a couple of seeds of a variety germinate (I like at least 4 of each) I take softwood cuttings in February or March, at the time you would usually pinch out the tops (another thing that I don’t bother with. If they’re grown well, the tops die off anyway, if not I nip it off at planting time)

And that’s it, job done until December when I dig the trenches. This is the most physically demanding job, and the one that does put a lot of our older visitors off growing sweet peas themselves. However, I do say if they’re only growing a few up a wigwam, then it’s only a 2 foot hole the width of their wigwam, not the 16 x 5 meter trenches we do. Even that’s not a lot compared to what some of those serious showers do, though it feels like a lot at the time. I dig my trench 1ft wide by 2 foot deep, making sure it’s in line with where the canes will be (I’ve made that mistake before!) fill it with our own compost and lay in the seep hose (the seep hose isn’t essential, but I like it in there at the base of the trench for ease of watering. And that’s it, job done until April when I put the canes up and plant the peas out. 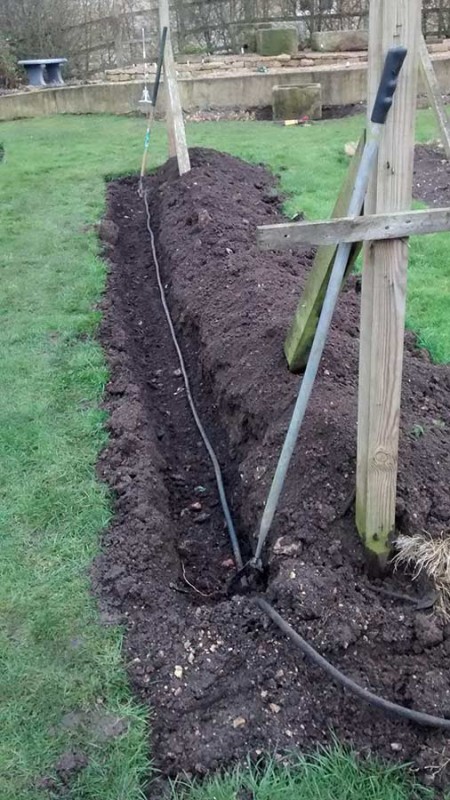 I dig my trench 1ft wide by 2 foot deep

Around March time I start to harden off the peas; this is because I’m paranoid I’ll lose the lot if I grow them outside. I know of somebody who lost most, if not all, of their crop to pigeons a couple of years ago. Once I’m sure they can handle a bit of frost, and the ground is starting to warm up a bit, in late March or early April, they get planted. I like a minimum of 8 canes per variety and so I plant 4 plants on every other cane. The empty cane is left for the spring sown peas, which are sown as soon as I’ve finished planting out, and go out themselves around early May. The November sown peas will then sit there seemingly doing nothing. Every year they just sit there taunting me in a game of chicken; “we’re not going to grow, you’re going to have to put some Growmore down, we’ll never be in flower in time for sweet pea week, we’ll be about 2 foot high, everyone will be disappointed, you’ll get the sack” they seem to be saying, but I never blink, I know they’re putting their roots down, and once that’s done they’ll grow away faster than I can tie them in.

During May and into June, having chosen the best side shoots, all I do is tie them in as required and take off any tendrils that are grabbing other shoots or offending my eye. Then I wait; wait for the moment the first flower appears. It’s always over the weekend so I never see it first and it’s usually ‘King Sized Navy Blue’ or ‘Watermelon’ (both outstanding sweet peas) but it’s always an anticipatory moment, I have a big sigh of relief when the first flower arrives. 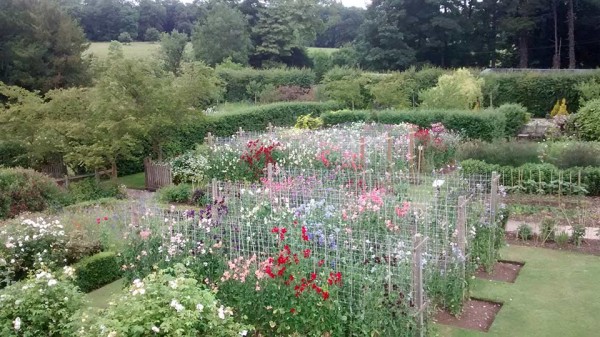 From that point to the end of July or mid August I tie in everything the plant can throw out using a Max Tapener; frustratingly temperamental, but I prefer using that rather than tying in with string with the 1000s of knots a year that that would entail!

No cordon growing for me, maximum flower production is what I want. They start off with long, show winning standard stems, but as the side shoots start to flower they become shorter. As the November sown peas start to have shorter stems, the spring sown ones are starting to flower and they have nice long stems of their own. Then we keep picking so they keep flowering and as the plants reach the top of their cane, or to the top of the supports, I snip them out and let the side shoots carry on growing and flowering.

I grow the heritage/antique/grandiflora/old fashioned types on drums made from pig wire attached to a tree stake as they’re shorter and bushier (in general). Taking rogues out during this time is important a) because I feel stupid when there’s an obvious rogue growing and b) if I leave them I’ll be picking wrong seeds come August. Around the end of July I ease up on the amount of dead heading and give them a few weeks of high potash feed, by this time I don’t really care how long the stems are as long as there’s still plenty of flowers, the flowers I’ll be leaving to collect my seed from. If I leave it any later in the year it’ll be too late and they won’t ripen fully.

Collecting the seed is quite awkward, the way I grow the peas, because they’re not all nicely regimented so I make sure, during flowering time, that I tie in any shoots which have decided they prefer to be growing with ‘Pip’s Cornish Cream’, on the other row, or in with ‘Our Harry’ next door, back where they should be as, when they’re just seed pods, it can be difficult to see who belongs where. I leave the seed pods until they’re just starting to turn yellow. I used to leave them until they were starting to dry out, but I lost a whole row of seed to a, presumably, obese field vole. So I get them before he does. Also I don’t like to leave them too long as they split and drop seed all over the bed which, as is always the case, they will grow better than mine and get tied in along with mine and then show their true identity 2 days before sweet pea week. Leaving me with a massive gap where I’ve had to grub them out. 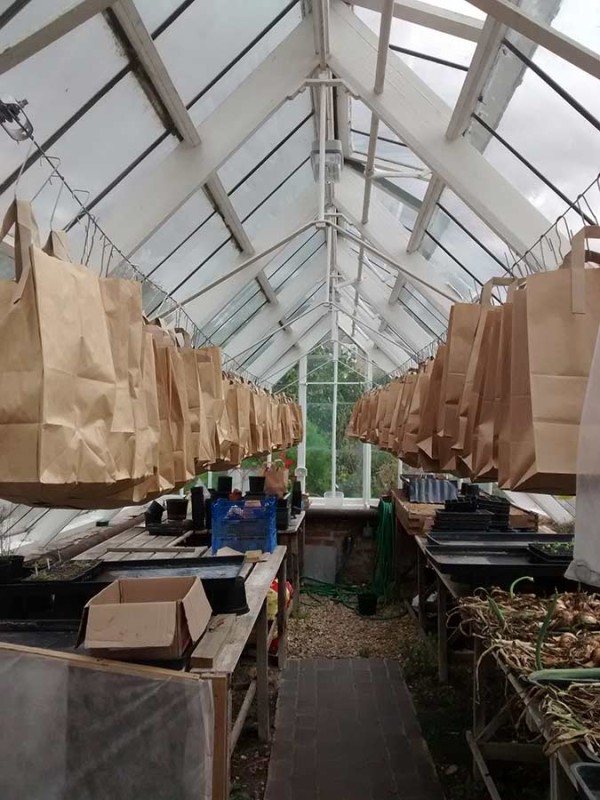 Picked pods are then hung in paper bags in the glasshouse

The picked pods are then hung in paper bags in the glasshouse to dry out and split at will, this provides other staff with a job to do during the slower back end of the summertime. The seeds are boxed up in airtight boxes, with one of those silicone anti-moisture things (something we found out from a seed house) and left in a cool shed until they get packeted up for selling.

When we’ve finally squeezed every seed off the plants that we can, they get taken down and burnt. The anti-slip cord and netting get labelled up indicating which row they came from to save time faffing about in April when we can ill afford to be faffing around.

And that’s it, by the end of September it’s all done, giving me a couple of month’s breather before the whole cycle kicks off again.