The genus Salvia is a huge one, with over 700 species in the tropical and temperate parts of the world.

Needless to say it is extremely varied and within it are some excellent garden plants. My focus is on the small, shrubby salvias from Mexico and a few of the lesser-known perennial species which are great for height in the centre or back of border. The attraction of these plants lies in their variety of colour and their length of flowering, which can be from June to November given favourable weather conditions. The scent of the foliage is also an added bonus. There has been a huge explosion in the number of small shrubby salvias available in recent years and many still need to be tested for hardiness, as it is not always certain what the parentage is. The majority of these will be hardy down to around -8 degrees Celsius, given the right growing conditions.

The shrubby salvias consist of two species, Salvia microphylla, generally from high mountainous areas and hardy, and Salvia greggii, from lower elevations and less hardy. These two hybridise naturally in the wild forming Salvia x jamensis, hybrids of mixed hardiness. To confuse things further, other species are also used by growers, to improve the colour range and to create bi-colour forms. Some of these newer varieties may well prove hardy in the future, but this article is based on our experience of the varieties we have grown over the last 8 years or so. This experience includes the winter of 2010 / 11 where the temperature went down to as low as -18C at night and one day when it never went above -11C. We lost many plants in this winter and it certainly sorted the salvia men from the boys. I was lucky enough to see the former National Collection at Rodbaston College in Staffordshire, run by Yoke van der Meer, on a number of occasions. She grew many outside and the ones that survived tended to echo our experiences. 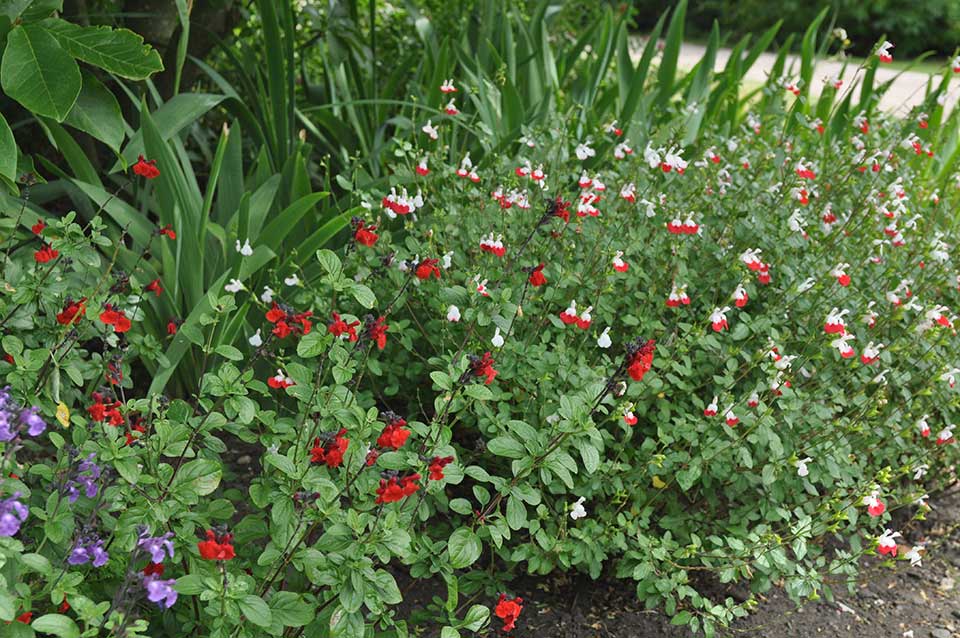 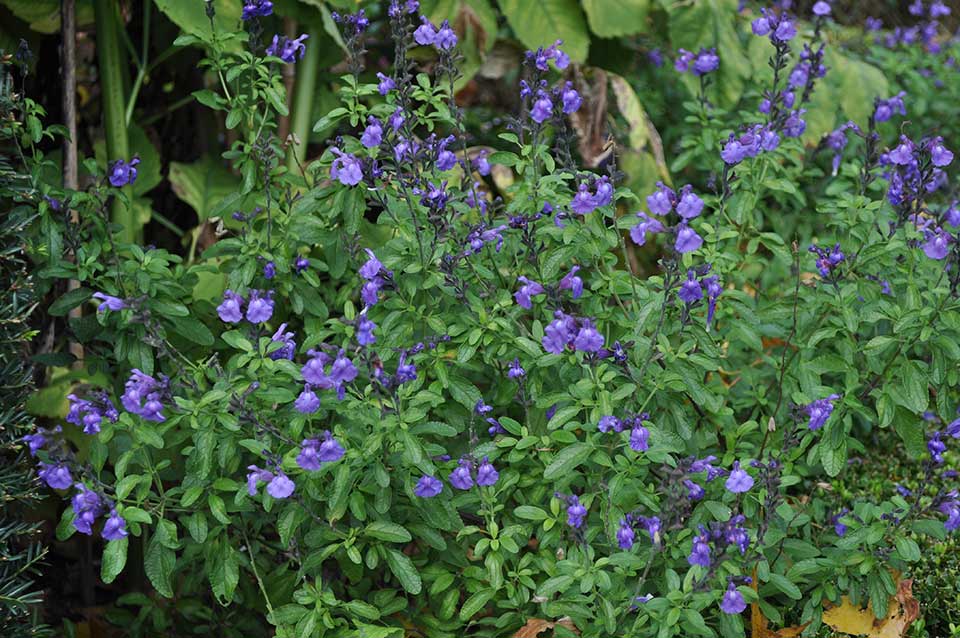 The following salvias belong to the shrubby group and have survived all of the above conditions and temperatures. 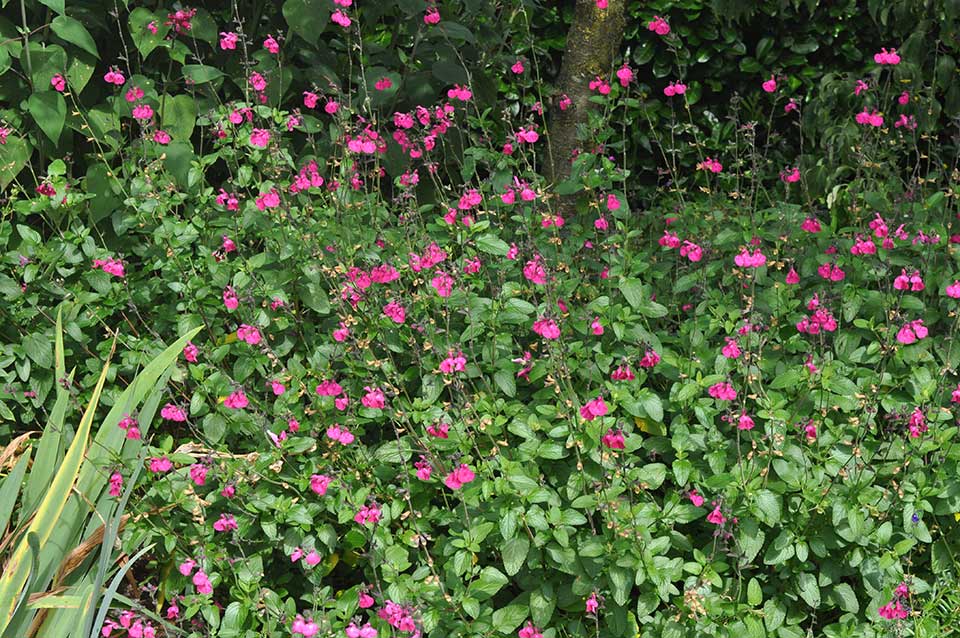 The next group of Salvias are tall herbaceous plants, which I think are lesser known, that look great mid to back border. 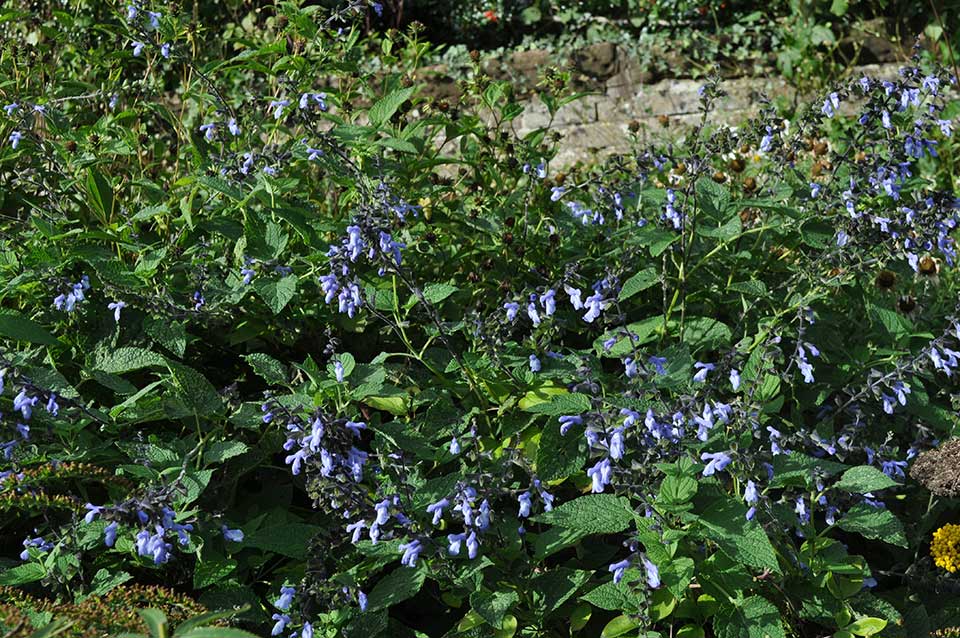 Nearly all of these plants, and particularly the shrubby ones, prefer full sun but will stand part shade. They are not always as floriferous in a shadier spot. The key to most salvias surviving is having reasonable drainage. The better the drainage the tougher they become. I don’t believe the amount of rain is an issue so long as the drainage is alright; lack of sunlight hours may reduce the amount of flower production though. It is probably also the case that the further north you go, the later they will come into flower.

I would also recommend planting them in the spring, which gives them a full growing season to get established, giving them the best chance of coming through the winter. We prune the shrubby salvias in the spring once we can see the effects of the previous winter and the new growth is starting to show. You can simply cut the dead bits back to the new growth or be harsher and let them regenerate from lower down. Some people prune them again in late July to encourage fresher growth and more flowers. We never get around to doing this and find that they just continue to flower throughout, getting even better in late summer and autumn. We never feed our salvias as this tends to encourage too much lush growth at the expense of flowers.

This is a fantastic group of plants that are hard to beat for length of flowering; a fantastic addition to any garden. If you are on heavy soil and struggle to grow them in the ground they make superb pot plants too. There are many new varieties appearing, in a variety of colours, which we are testing, ‘Peach Cobbler’, ‘La Luna’ (yellow), ‘Nachtvlinder’ (velvet purple) and ‘Javier’(lavender blue). We hope that some of these will prove as tough as the above, and this winter, according to all of the predictions, could be their sternest test yet.

I would welcome any information from members of their experiences with these plants.