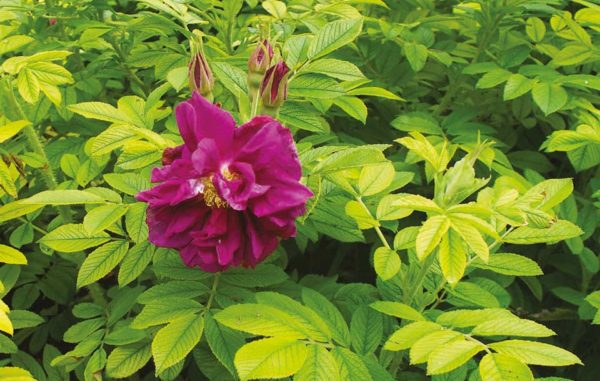 The species Rosa rugosa was introduced to Britain from Japan in 1776 and is sometimes still known as the Japanese rose (not to be confused with Rosa japonica which was bred in Europe). It is native to Northern China, Japan and Korea, where it is a coastal plant often growing on sand dunes – naturalised plants in the UK may be found in exactly this habitat, making it a perfect choice for coastal gardens or sandy soils. The species will have large single flowers (good for pollinators) 3½-4”/ 9-10cm with a purplish rose colour and strong ‘old rose’ fragrance, forming a large and vigorous shrub up to 8ft/2.5m in height. For a more manageable and shapelier shrub, try pruning to half its height when dormant buds begin to swell and, perhaps unusually, severe dead-heading to a couple of leaves below the spent flowers. On poor soils it will be considerably shorter. Rosa rugosa ‘Alba’ is a little shorter, at 6ft/1.8m, with pure white flowers. Seedling raised plants of both will usually (but not always) come true but as they are prone to suckering, this is the cheaper option for a hedge. For other uses, obtain grafted plants; both will produce large, tomato-red hips.

The species is the one to choose for the most extreme conditions but hybrids with rugosa in their breeding will share many of these characteristics.

Double and semi-double forms include: Rosa ‘Blanc Double de Coubert’, which has large, semi-double, strongly fragrant white flowers that repeat well over a long season 5ft/1.5m high. Rosa ‘Roseraie de L’Hay’ has large fully double crimson/purple fragrant flowers, vigorous and repeating but large 8ft/2.5m. Rosa ‘Hansa’ is very similar, strongly fragrant, but shorter, at 4ft/1.2m. Rosa ‘Mrs Doreen Pike’ was bred by David Austin, who is never quite sure whether to include it with rugosas or English roses. I include it here because it certainly has some rugosa characteristics, being tolerant of poor conditions, tough and disease resistant. Small, fully double, mid-pink, strongly fragrant flowers and 4ft/1.2m high.

You may not be gardening on a sand dune but with this range of colour, size and form, together with some of the best scents of any roses, there should be something to suit almost every garden, whether in a mixed border (at the back for larger forms), as a specimen or indeed as a hedge; they could well thrive where roses may not have seemed an option.