On the 12th of March, six lucky PGG trainees boarded a plane for Portugal. We were not entirely sure what to expect or what exactly we would be doing however, as the week went on we became more enlightened. The places that we visited did not disappoint us and the people that we encountered were more than hospitable. Sintra consists of a series of steep, wooded hillsides, with palaces and gardens caressing the rocky outcrops, precipices and cataracts. Being positioned between the sea and a succession of mountains, Sintra has its own cooler and wetter climate compared to the rest of Portugal. As we were going to Portugal, we thought it would be hot and sunny, ha ha. Sunday was just about warm enough to wear shorts but we were the only ones to do so. The locals were wrapped up a lot more warmly. It rained heavily on Tuesday and Friday and we were very glad we brought our waterproof coats. 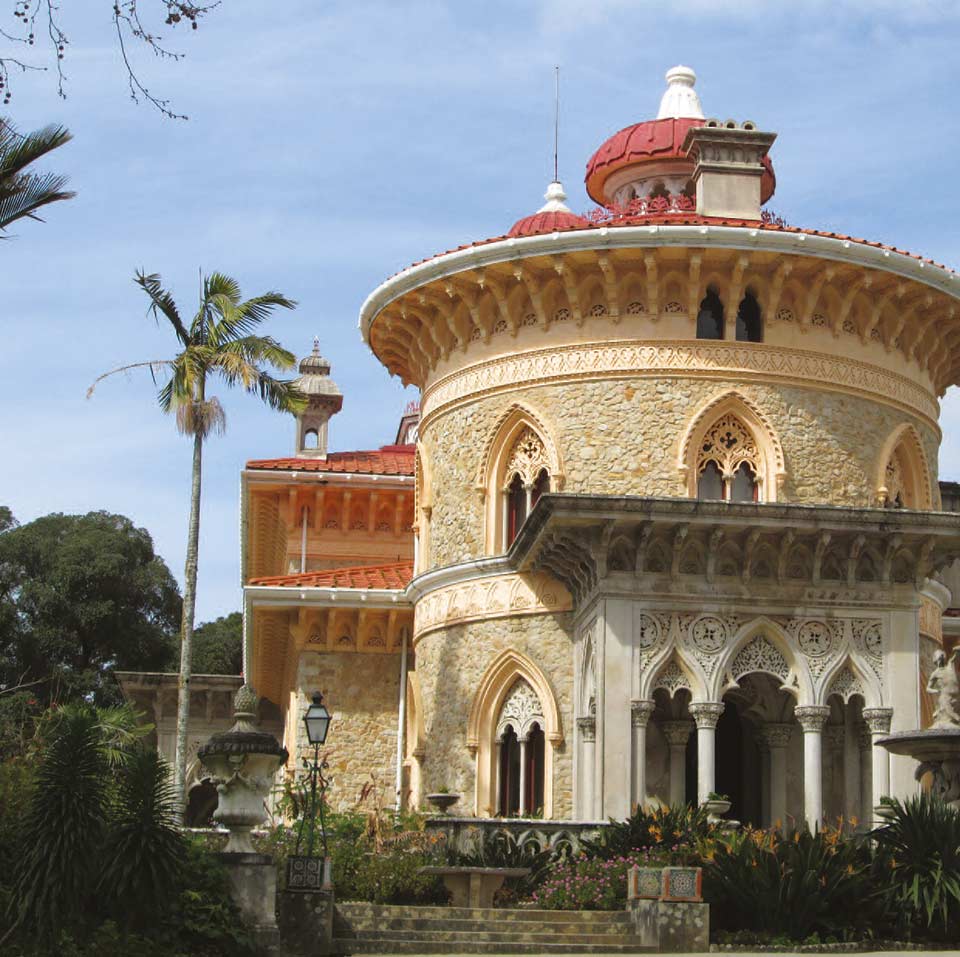 In 1995, Parques de Sintra was classified as a World Cultural Landscape by UNESCO (United Nations Educational, Scientific and Cultural Organisation). It was the first Cultural Landscape in Europe. Parques de Sintra looks after 40% of the area; the rest is privately owned. There were several different organisations looking after various parts of Sintra before they were merged into one. These included heritage, environment, and forestry services all working separately. They were combined into one company in 2000. Parques de Sintra now looks after the public areas. The company receives no government funding and has to be selfsustaining. The properties were abandoned when the company took them on and the gardens were just woods. As the palaces and gardens were improved, more visitors came, providing more funding for more restoration. This cycle has continued to the point that now two million or more visitors come a year. At Sintra, they say ‘open for works’, meaning that the buildings and gardens are always open, regardless if works are going on. Representatives are available to explain to visitors what is happening e.g. archaeological surveys.

Pena Palace lost lots of trees in 2013 because of a storm. The soil is very thin, sandy and full of rocks. The roots of the trees don’t go down very far and attach themselves to the rocks. This makes the trees very unstable. The soil has low nutrients and little organic matter. Another problem is invasive species from Australia, mainly Acacia and Pittosporum. They both produce numerous seeds that germinate with ease at 5000 seedlings per m2. This looks like a grassland and stops the native flora growing. The problem is so severe that they have resorted to using herbicide. Fire is sometimes used but is limited because of the woods. Research is being carried out into using insects from Australia to eat the flowers of the invasive species and stop them producing seed. This comes with a huge amount of risk and the bugs are under high surveillance. Surprisingly, Rhododendron ponticum is not a problem in this part of the world. 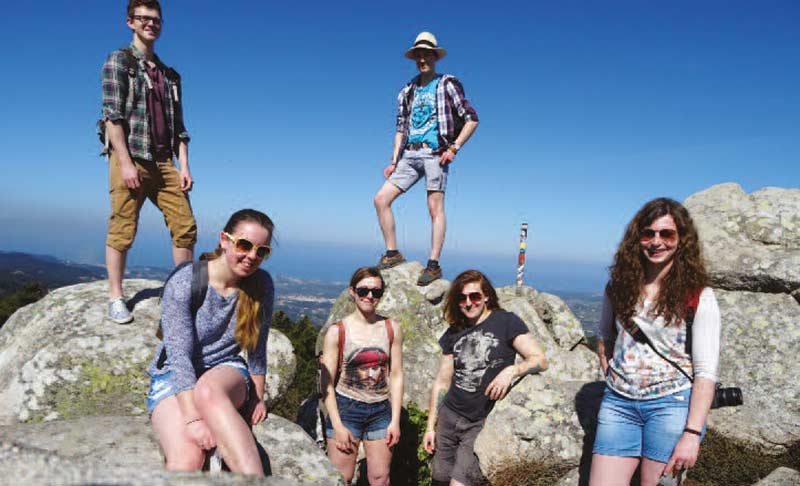 We spent most of our time at the Park and Palace of Monserrate. I think we managed to weed most of the Fern Valley and give it a good tidy up. One criticism that I thought I would never hear was that we were working too fast. We were asked to dig out and pot up some Dryopteris. I got the impression that 450 potted specimens was more than enough. On the plus side, because we got the work done early, we were permitted to go exploring for the last hour of the working day. I rather liked the tree ferns till I had to start working with them. We had to remove the fronds to let more light in. Unfortunately, tree ferns are covered in irritating hairs. Our clothes were covered in them and were promptly thrown in the washing machine. The Portuguese are fond of African hoes. These digging implements were used instead of spades. We used them to dig up some Clivias and plant them on the terraces in the Fern Valley.

On Thursday, we were given a guided tour of the gardens at Monserrate. The gardens are mainly accredited to Francis Cook, who purchased the property in 1856. The initial garden was created by William Beckford. The estate was sublet to him from 1794-1796. Romanticism and Picturesque were the garden fashions of the time. The garden was to evoke feelings and emotions. For instance, Vathek’s stone arch does not look safe, giving the visitor a sense of fear and questioning whether to walk under it. Vathek was a gothic novel written by Willam Beckford; many features have associative names. Sintra is blessed with ample water, humidity, shade and natural protection – perfect growing conditions for tree ferns, though Sintra also gets its fair share of sun. The water is stored in two reservoirs that feed the waterfall and watering system. The waterfall drops into a horseshoe- shaped lake inspired by a story of Pegasus, who created a lake by treading into the earth. The lake was lost for a time to invasive Hedychium. 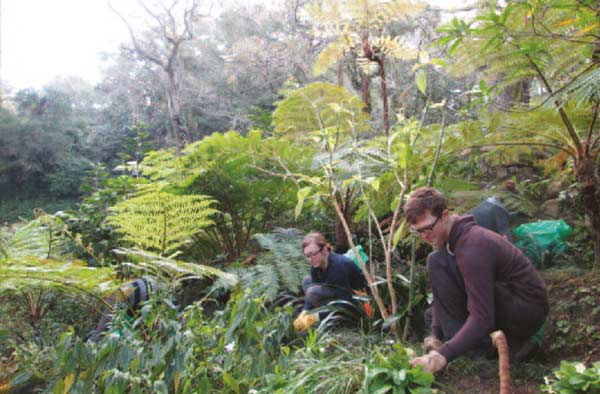 Evidence that this was a working expedition!

The tree ferns planted at Sintra were the first in Portugal because of the climate. The large Platanus trees provide shelter from north-west winds. Tree ferns are symbolic of longevity. Again, the area was overtaken by Hedychium and required much restoration. Two other favourite plants for the period were Quercus suber and Arbutus unedo. Both are grown for their ornamental bark. Arbutus trees were grown near schools, much to the delight of the children who got drunk from the highly alcoholic fruits. Another favourite element of 18thcentury gardens was ruins, particularly of a mediaeval nature. The chapel ruin does contain recycled elements of a genuine chapel but otherwise it’s fake. A mangrove tree (Rhizophora?) was planted later for artistic effect to grow over a corner of the chapel.

Between 1873 and 1875, a romantic landscape artist, William Colebrook Stockdale, was hired. He made a decisive contribution to fashioning the garden as it is today. The garden was designed to have picturesque spots. You walk through woodland and then step out into an open area with a fine view. Nearby is a small lake with different levels to grow a wider range of plants. Another lake is used to divert the water away from the Mexican garden. Many of the ‘lakes’ we saw were more like ponds in our eyes. The Mexican garden is the hottest place in the valley. It receives the most sun and is home to very large and impressive Agave. The Mexican garden was flooded in 1983 and was mostly swept away; only the Yuccas survived. The lawn was one of the first in Portugal to be green all year thanks to the irrigation system. It is/was all gravity fed but the plumbing unfortunately no longer works.

Monserrate belonged to the Cook family for three generations. In 1929, the losses caused by the Wall Street crash in New York led the grandson of Francis Herbert Cook to start selling the properties scattered across the Serra. Finally, it reached the point where he decided to sell Monserrate. 1n 1946, the property was offered to the Portuguese state, but eventually it was sold to Saúl Sáragga, who auctioned the contents of the palace. In 1949, the property was finally acquired by the state. From 1995, Monserrate has formed part of the Cultural Landscape of Sintra, classified as a UNESCO world heritage site. 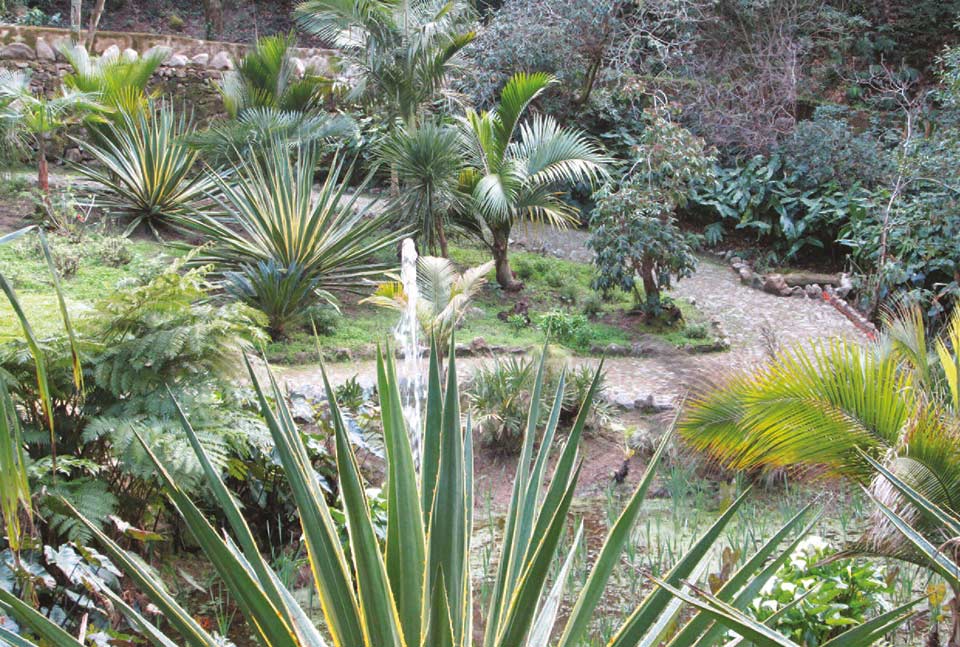 We also visited Pena Park and Palace. The Palace from the outside reminded me of Balamory, with its multi-coloured buildings. Like Monserrate, the gardens were very informal with numerous winding paths. At times you feel like Indiana Jones, as you never know what’s around the corner. It was hard work walking up the steep slopes but the views from the top were worth it. Pena is home to a large collection of camellias introduced by King Ferdinand II in the 1840s. All members of the Portuguese royal family of this period have been commemorated with their own eponymous camellias. There is also the Queen’s Fern Valley and many small buildings, such as the Chalet of the Countess of Edla. Prior to the 18th century there were hardly any trees in the park, so the palace was just perched on a bare rocky outcrop. Native and exotic plant species originating from the four corners of the earth appear side by side in a luxuriant setting, considered by some to be among the most beautiful scenery in both Portugal and Europe.

The six of us who went on the trip would like to thank John Humphris and the PGG for making this possible. Not only was it highly enjoyable we also learnt how a different country gardens and the plants they use. Portugal was not at the top of my list for garden visiting but evidently it has a lot to offer.