Untangling the names of Libertia species

Back in 2011, I wrote a short article (The Professional Gardener issue No. 130) promoting the National Collection scheme organised by Plant Heritage, based on the experience of attaining the National Collection of Libertia. The more vigorous Libertia in our collection are incredibly useful in a zoo situation, mainly because nothing eats them (they all have calcium oxalate crystals present), but also of course because they are tough, problem free, colourful in season, easy to grow from seed, and, with care, easy enough to move even when large. They do have a downside, in that they look better if deadheaded after flowering, and they also suffer in a real winter – we spent weeks after two recent winters of minus 15C removing dead leaves. A slow, planned replacement is under way, not replanting but using new, less work-heavy plants such as Moraea huttonii, but we do not waste the old libertias, as they go into the meerkats (who rip the plants apart looking for insects) or the chimp or gorilla houses, where they give a more natural look – at least while they last! 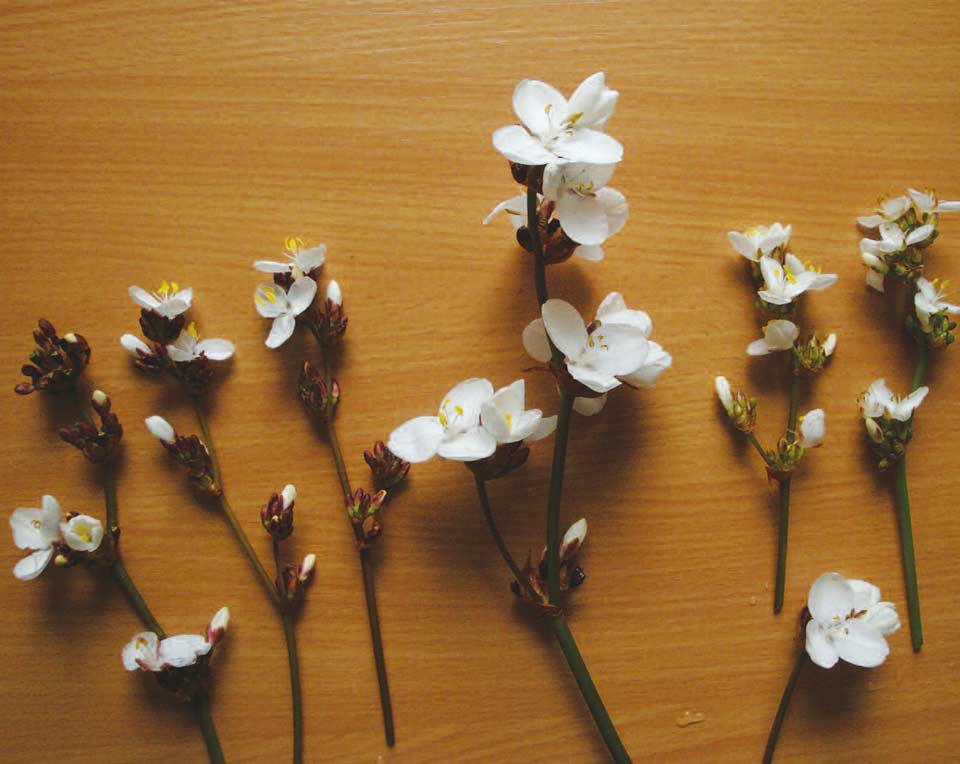 Collecting Libertia eventually gave me the largest collection in any one garden, but I must say I found the nomenclature very confusing. Enquiries with the RHS ended up with an offer from their botanical team to look at it, and for me a long two months of preparing herbarium specimens and good pictures, including closeups for all the species and cultivars we had while in flower, with full details of flower colour and size, leaf width and length, on a standard sheet that went with each herbarium specimen – a lesson in patience but great to have at the end. A visit from Julian Shaw, Registrar with the RHS, was essential; armed with my herbarium sheets and pictures, and following a close scrutiny of the living plants, he then went off investigating. I can only describe it as a detective story, unravelling the naming of the various species; where confusion arose over some, he pulled in information from New Zealand, Australia, Chile, and several herbaria in the UK, with scanned images of many sheets. The RHS published his findings in The PlantsmanVolume 14 Part 2 June 2015. 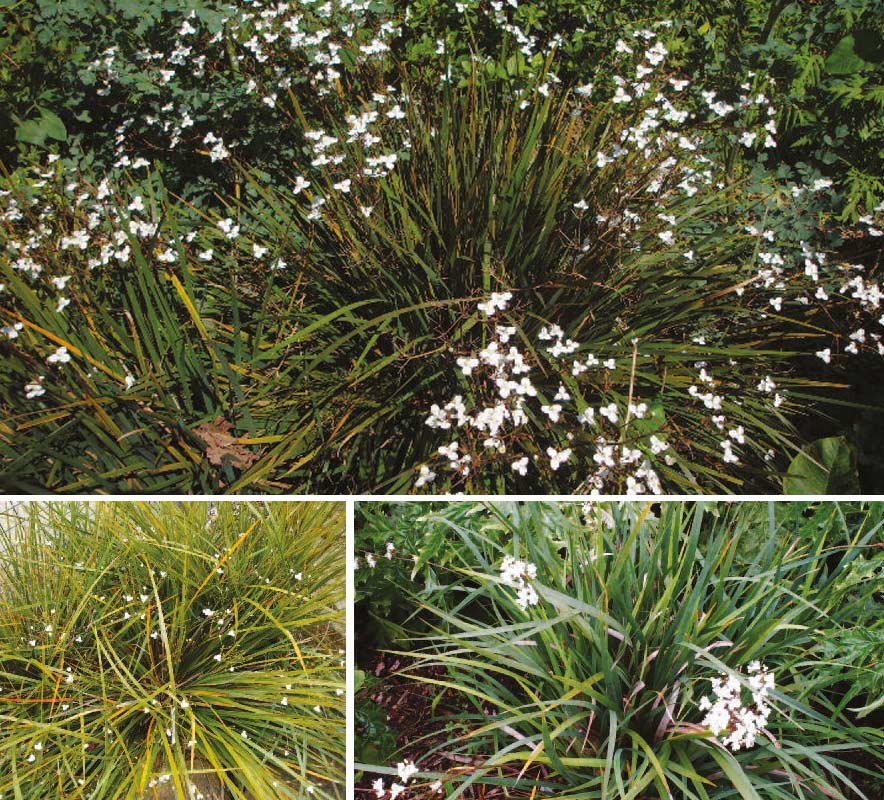 Found under the name L. breunioides, a name not recognised and no one seems to know how, when, or where, it was named. I sorted this out by the simple expedient of ordering seed from New Zealand, and when L. cranwelliae grew it was identical to L. breunioides. The leaves are a brownish colour unless in shade, the plants spread by orange coloured stolons, readily forming a dense colony. Large white flowers are produced after at least two years from seed, are held at half the leaf height, and the large round seed pods are held tight shut until the following spring (with us anyway).

This is the complicated one, a very variable species,widespread in Chile,and the commonest species in cultivation. Usually grown under the names L. grandiflora, or L. formosa, and sometimes L. elegans, all of which are technically incorrect. The confusion stems from a description in 1856 by Philippi, who was unaware that the specific epithet grandiflora had been already used in New Zealand in 1810 for a different species (but under the genus name Renealmia). The formosa and elegans epithets come from a description in 1833. The chilensis epithet was published first in 1810,but under the name Strumaria chilensis. L. procera is a name not recognised, it means tall and it is, but again the origin of this name is not known. You can see why I was confused, and had to have botanical taxonomy assistance!! All flowers are white, green leaves vary from 35cm to 75 cm depending on group below. No stolons produced.

With so much variability this species has been split into three groups as below:

A shorter plant than usual, with a more open umbellate inflorescence. Not that often found in cultivation, but has been found as an escape in the UK.

The commonest form, very widely grown, very variable in flower size, bud colour, and stem colour. If propagated vegetatively you can get a clone that is distinctive, there are a few listed. I have seen plants grown from seed collected in Chile that, within six seedlings, had six slightly different plants, proving the variability was inherent in the natural population. 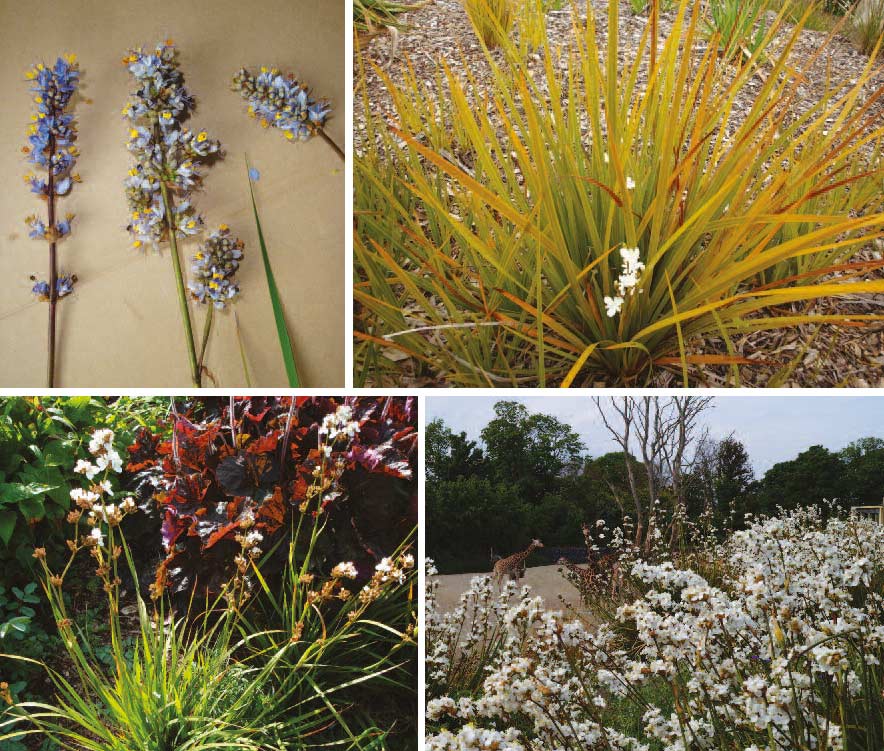 The tallest, most vigorous grower, with larger flowers that look me in the eye and I’m 6ft 2in.
We regard this at Dublin Zoo as L. chilensis on steroids, and if we want more plants we use this as seed source now.

The true species. This is very seldom seen in cultivation, but I do have some at Dublin Zoo – accessioned as Libertia paniculata. A much shorter plant, green leaves to only 25cm at most, one to six white flowers per panicle, more open than the usual L. chilensis above. Self.infertile, so harder to get seeds for increase. Flowers white.

Distinguished by stiff leaves that are not green but quite brightly coloured, with yellow, orange and reddish brown shades, and therefore popular with nurseries as they sell well on looks alone. No stolons produced.Several cultivars are in the L. ixioides Tricolor Group, produced in New Zealand.The specific epithet tricolor comes from a specimen named first as Sisyrinchium versicolore, in 1863, renamed L. tricolor also in 1863. Flowers white.

Commonly grown, and easily recognised by vigorous stolons, quickly forming an open colony of fans of leaves. Leaves are green in shade, but a distinct copper colour in sun.There are cultivars with slight differences in leaf colour.

So easy to distinguish as it is the only blue flowered species! As the name says the flowers are sessile,no stalks,they form a very tight bunch and are less, to my eye, ornamental for that. There are different shades of blue available, the dark is better, a pale one looks washed out. We find they suffer more in a really cold winter,with almost all leaves going black. L. caerulescens has been sold for many years, any I have bought are either L. sessiliflora, or, worse, actually Orthrosanthus laxus! This has six petals, rather than the usual three for Libertia, of a most exquisite blue, but we find the plants are short lived after flowering well for a year or two.

Again easy to distinguish, as it is the only white flowered species with only green leaves (with a slight pale sheen) that produces stolons, gently forming a dense stand. The flowers are to my eye more decorative, held slightly more loosely than L. chilensis in any form. Julian Shaw sent me a scan of a herbarium sheet from 1871, from a Chilean collection, asking if I had this one, stolons very visible, delicate flower head, very easy to recognise, but it was labelled as the New Zealand species L. ixioides, and was assumed at that time to be a cultivated introduced plant there!

I suppose I have to include this… if you cross L. chilensis and L.ixioides you get variable hybrids, one in trade is ‘Amazing Grace’. These arise spontaneously,and we have several at Dublin Zoo now, which we noticed as being a little bit different. They had come from seed collected either by ourselves or a liner producer we know, and grown on for us; there were about 2000 or so, so no sure way of tracing back the crossing.Julian Shaw needed to put a name to this garden hybrid, and mine was handy; I’m told it recognises the amount of work I’ve put into the collection.

To conclude, if I had not decided to gather enough Libertia to form a National Collection, I would never have seen the range available, and certainly would never have realised the naming issues – so many times I bought plants under the wrong name. I’m told this is the general chorus from all National Collection holders, so if you have an interest in a particular genus, why not start collecting? It can become addictive, be warned, but it’s ultimately worthwhile and, dare I say, rewarding!